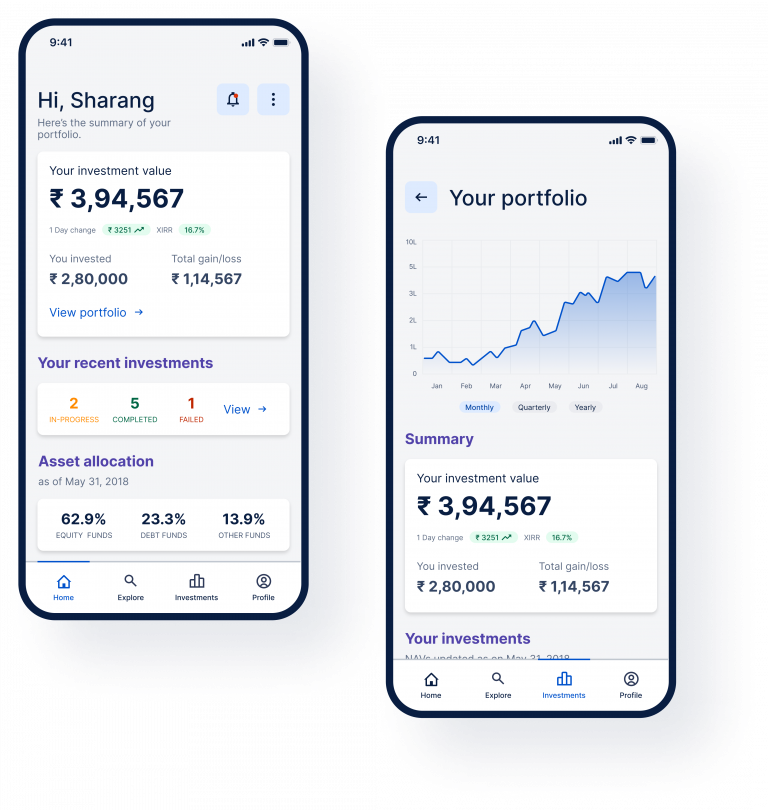 FundsApp is the app mainly designed to make mutual fund investing easy for people who do not have enough information in the investing domain. Mutual funds is considered as one of the best way to invest your money with moderate risk to get more returns in a longer period of time. But, to invest in any mutual fund, all of the available fund schemes have a huge data set and need to be analyzed and then make the decisions on the investments by the user. This process is cold, tiresome, and has high dropout rates because of not understanding a lot of things that are too corporate and some of the jargons used in mutual funds. The aim of this project was to provide a simple, goal-driven, easy-to-invest, and more personalized app along with giving appropriate insights on the users’ investment journey that makes them make smarter decisions on their investments over the time.

In a nutshell, when it comes to mutual funds, they’re not as simple as Fixed Deposits! Why I’m saying this is because, unlike FDs, there are hundreds of mutual fund houses operate in India and they each have around 10-20 different schemes based on the Indian stock market. That means, there are thousands of different mutual fund schemes, each having their own historical years of data and information, to be analyzed, from which user needs to pick some that are efficient, providing good returns over the period and having minimal risk factor as much as possible and before this, they also need to go through the KYC(Know-your-customer) process which is mandatory in India. As you’re reading the previous sentence, you can imagine that this is pretty frustrating for the users before investing their actual money in the mutual funds.

To solve this, we looked at a lot of different available apps in the market that does provide the simplicity and efficiency towards making the mutual fund investments and based on the competitive study, we found out that there are still three of the major problems that needs to be solved in FundsApp that will make it unique! 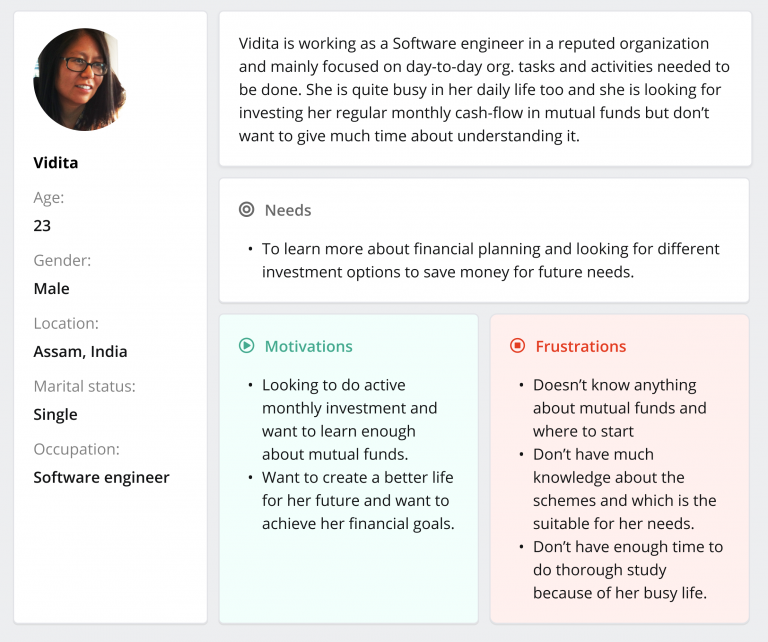 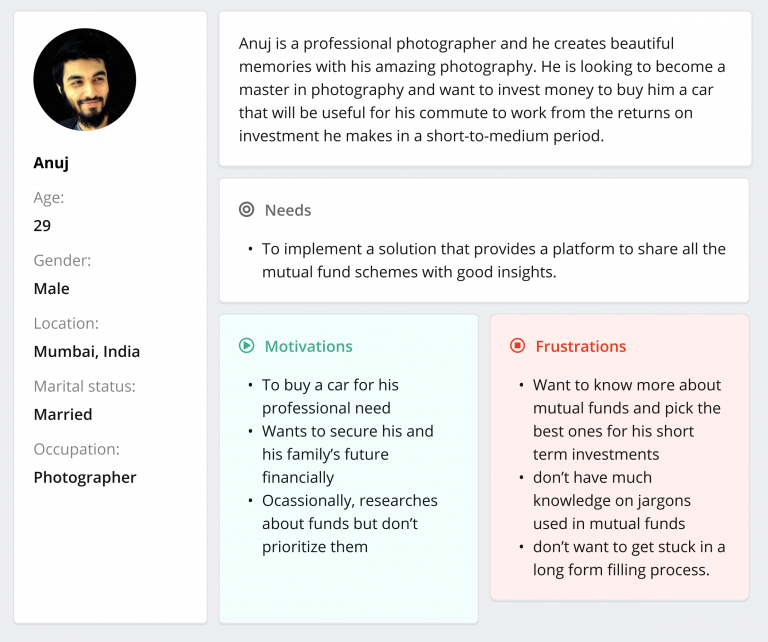 As we found out the major problems, I have conducted brainstorming sessions, designed iterative wireframes and did rapid wireframe prototypes to test some early solutions. But, before doing this, I’ve created set of different use cases, user stories and also did a task analysis based on which I’ve created an information architecture of FundsApp. Once we’re done with the process and several iterations, I’ve designed a high-fidelity wireframes and prototypes.

We provided simple and straight-forward easy sign-up process to onboard users quickly on Fundsapp.

For the new users, we built the personalized experience along with providing sufficient information by sharing some blogs, top performing funds, latest news and some common personal goals they’re trying to achieve with their money. Fundsapp also provides the information snippets based on their investment style (i.e either monthly SIP or One-time). This information snippets have a set of pre-selected, hand-picked mutual fund schemes that has delivered good returns over the time, which we’re recommending to these new users, that helps them in making smarter and quick decisions.

KYC is a mandatory step for the users to make an investment and can’t be ignored. Based on the usability study we did, we found out that, there are significant number of users who are not completing their KYC process because of the cumbersome and involves a lot of form-filling process. Also, users were getting frustrated and giving up because, they didn’t even get to know anything about the app or the mutual funds for which they’re on the platform ultimately.

So, we moved the KYC process at the end of the mutual fund investing! What it means that, we first let the users explore the app, build a trust on the platform, get them to know significant info about mutual funds, get some good ideas on how they can achieve their personal financial goals and finally, decide in which scheme(s) they want to invest. Once they decided it, then they can go ahead for investing in the scheme and that’s the point where we decided to bring the KYC process. This was an important change as we allowed users to try the app, learn about mutual funds if they’re new, explore all the available options, make the investment decisions based on our features and much more. 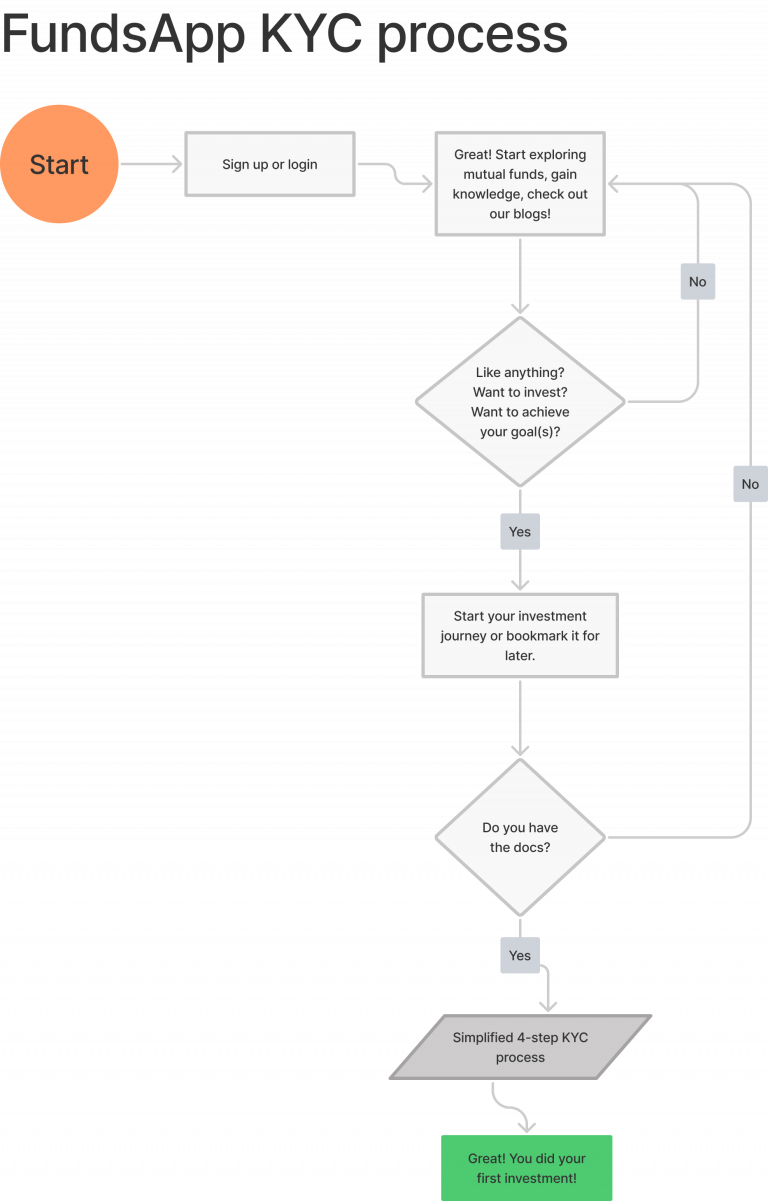 To make KYC process simpler and easier, there are government approved guidelines available, from there, we found out what are the minimum requirements to complete any KYC and how we can speed up the approval process using the government approved APIs that does a lot of time saving for the users by directly uploading the documents on the government’s servers which helped us greatly. This literally cut the time needed to complete the KYC process in half!

To target the problem users having with the lack of knowledge on mutual funds and how they can keep their funds secured by gaining more knowledge around their investments, we introduced the concept of Fundsapp smart insights. This gives the users just enough amount of information at a glance that helps them to know where their investment portfolio is heading and what can they do about it, if at all any of their invested mutual fund scheme is not working as per the expectations or personal goals they’ve set. Based on these smart insights, users can take appropriate actions on their portfolio to get the maximum returns out on their investments.

To provide that personalized experience, we decided to take user’s journey on a next level where user can choose from a set of life goals that Fundsapp is providing and duration in which they want to achieve that goal by making recommended investment in a pre-selected portfolio of schemes that best matches the goa they select. This saves a great deal of time to go through different mutual funds, select/shortlist some and then invest wisely in them just to achieve their personal life goal(s).

Usablity testing 🎯
Project learnings 📖
What did I learn from this challenge?
Thank you for reading!
You might also like, 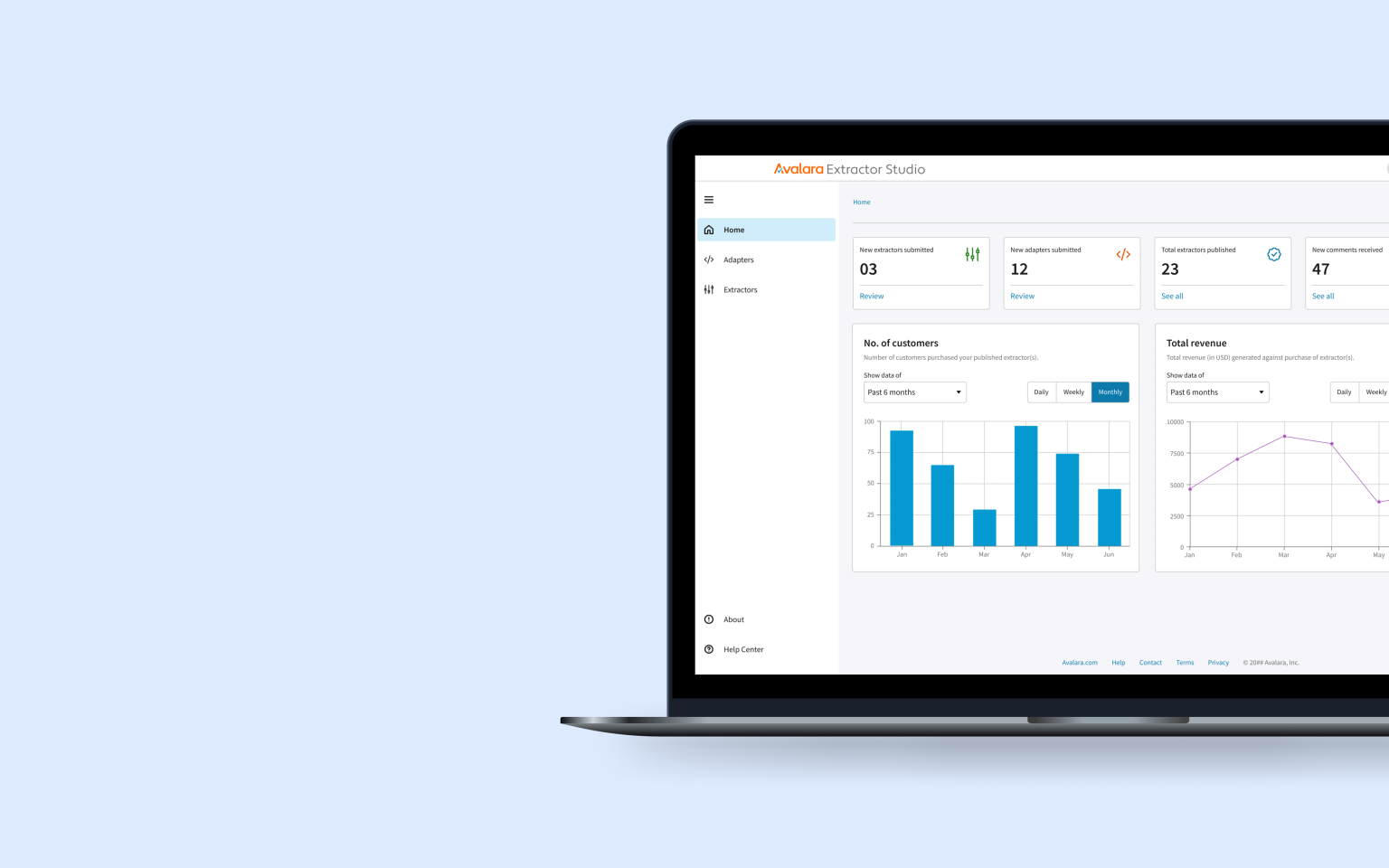 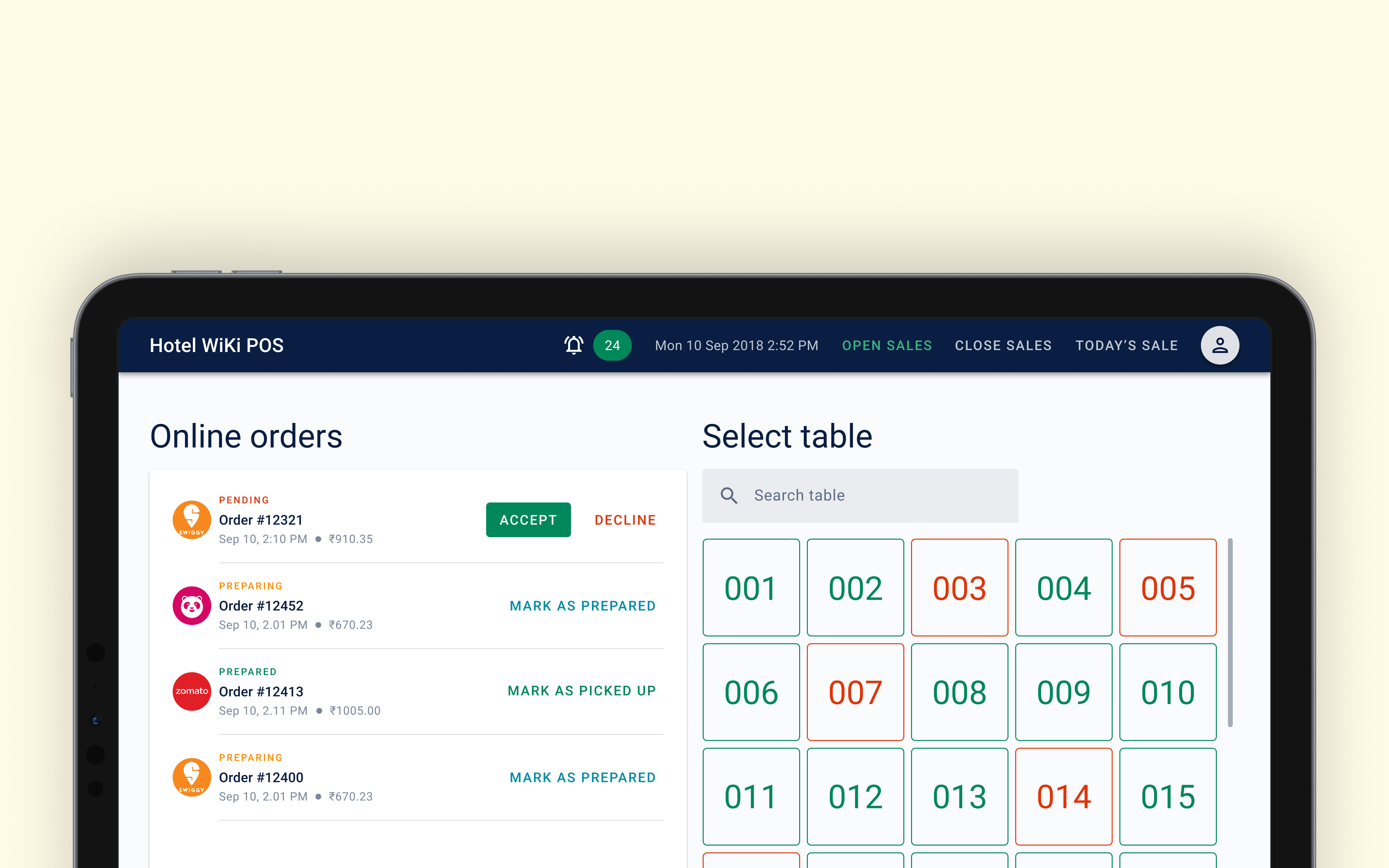 Feel free to reach out to me if you’re thinking about hiring me or would like to discuss your idea.